The 7O6T dxpedition has just begun and already the bands are absolutely jammed with signals. Here is a video showing the width of the pile-up on 17 metres (18 Mhz) CW.

Posted by HamRadioIreland at 11:04 PM No comments:

6 metre beam installed - just in time for the first opening!

On Saturday I finally upgraded my 6 metre (50 Mhz) antenna. I have been using a simple aluminium dipole since the sunmer of 2010. It has served me well, giving me 54 DXCCs over two seasons. But I have been hungry for something with a little more gain so that I might notch up some new DXCCs this year. So when I chanced upon a three-element beam for 50 Mhz I snapped it up! Tony EI4DIB and Jim EI2HJB, who have been involved in so many antenna installations at my QTH, made themselves available on Saturday afternoon and we set to work. It was cold and windy but sunny. So typical Irish weather !

This was not a complicated installation in that we were swapping out a 6m dipole with a beam, so we could use the same coax. We were also swapping my 4m folded dipole for a 4m dipole made from my recycled 6m dipole shortened down. Tony and Jim managed to get the SWR of the beam between 1.5-2 so that was fine. It is under the 2m XY beam on the same rotator. I am now well set up for VHF activities!

This afternoon, Sunday, the 6 metre band opened for the first real Sporadic E opening of the year. Very timely too! I put the beam through its paces. I worked a number of stations in Poland and Lithuania and Latvia. Some of the signals were very strong indeed. I was delighted. Below is a video of me working SP3OCC, Ted in Poland, on SSB. I had just worked him on CW. He was 10dB over 9 at times. Very strong.


Below are maps from DX Sherlock showing just how active the band was today. It really opened up for a while in Europe, although the openings to EI were limited along a narrow path to Poland and the Baltic area.
This was an unexpected opening, especially such a big one. My first QSO of the E season in 2011 was on May 1st, so we are just a few days short of that date and the band has opened properly for the first time. While 50 Mhz was active last summer there wasn't so much DX to be worked so we are hoping that this year there will be some new countries floating around. And with the three-element beam now instead of the dipole, here's one op who's chomping at the bit for some extra DXCCs! Happy DXing . . .
Posted by HamRadioIreland at 8:09 PM 1 comment:


I had the utmost pleasure of bumping into Peter Ball, EI7CC, at the Dundalk rally last weekend. Peter regularly visits Lesotho in Africa, from where he operates as 7P8PB. In March, I worked him on 15m CW as a brand new country, never worked before. It was a great pleasure for me to get him into the log, particularly because he is a fellow EI giving me a brand new DXCC. Just two days later, on March 22nd, I worked him on 20m CW as a new DXCC on that band. So he gave me two slots! To receive the QSL card into my hand a month and a half later was a rare pleasure I can tell you. I worked Peter on both slots with my trusty Butternut vertical and 400 watts. Thanks again Peter for the great pleasure! PS: Peter is one of Ireland's top DXers. You will regularly see him on Clublog in the top 10 for dxpeditions.
Posted by HamRadioIreland at 8:36 PM No comments: 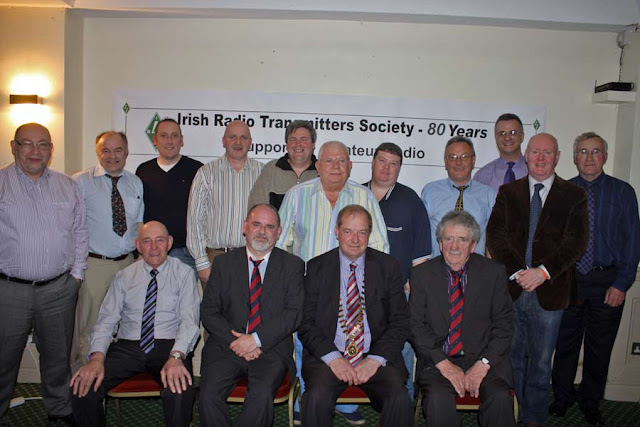 The HF bands are pretty dead this morning


HF propagation is non existent this morning. There is a moderate geomagnetic storm underway, with the K index at 5 (peak 6) which may be affecting things. I did hear one ZL station on 20m SSB this morning but pretty much nothing else. I made one contact with Gary EW1MM but he vanished in QSB. Above is a short video showing just how poor the band is. It's not that there's even any local stuff to be worked - it's just dead as a dodo! Ironically, the sunspot number is at 158, so hopefully when the aurora subsides we will have good propagation . . .
Posted by HamRadioIreland at 10:23 AM 4 comments:

We had a fantastic weekend at the 80th anniversary celebrations of the Irish Radio Transmitters Society (IRTS). By we, I mean the members of Dundalk Amateur Radio Society (EI7DAR) who were hosting the events at the Fairways Hotel in Dundalk.

On Saturday night there was a celebration dinner, which featured, among other luminaries PB2T, Hans Blondeel Timmerman, the President of IARU Region 1. Speakers included IRTS President (outgoing) Paul Martin EI2CA and EI7DAR Chairman Thos EI2JD, in addition to Marianne Butler, Chairperson of Dundalk Town Council. During his visit, Hans PB2T visited the shack of Thos EI2JD to activate EI and then he visited the shack of GI4SZW Seamus, to activate GI. These were the 59th and 60th DXCCs that Hans has activated.

Then on Sunday there was a radio rally followed by the annual general meeting of the IRTS. The rally was well attended in a big venue and everyone seemed happy, including the traders, who flogged some ham kit and made a few bob.

There was a very interesting talk about his contesting software (SD) by Paul O'Kane EI5DI.

There was a portable radio setup at the venue in Dundalk and for a short time I operated as EI80IRTS, the special callsign to celebrate the 80th anniversary year.

The rally was particularly enjoyable because I got to meet many hams, including some whose callsigns and voices were familiar, but whose faces I didn't know before today! So it was nice to meet you all.

PS: Sorry the blog hasn't been updated too often lately. I am half way through my new book on Newgrange, which is being published in the autumn. This is keeping me very busy, and unfortunately I am doing less radio as a result.

PPS: That hasn't stopped me from working the 9M0L Spratly Islands dxpedition on six band slots!!!
Posted by HamRadioIreland at 11:09 PM 1 comment:

I have taken a week off work so that I can get busy writing my new book on Newgrange which is due to be published in the autumn. I have been doing less radio as a result. However, with the 9M0L Spratly Island dxpedition starting today I could not stay away from radio! Besides, I made some good progress on the book in the past couple of days, so I treated myself to a bit of radio.

I was thrilled to nab 9M0L on 17m CW after an hour of trying, and them some time later I got them on SSB also. As this was a brand new DXCC, the delight was all the sweeter.

I did manage a QSO on 20m CW also, at around 9.34pm, but unfortunately they busted my call and gave me "EA2KC 5NN 5NN". I tried to correct it by giving my own call a few times but he had moved on to the next QSO. So maybe I will have to work them again on 20 metres, who knows? Nevertheless I am sure I am in the log on 17 metres so it's a thrill to have this new one.
Posted by HamRadioIreland at 11:40 PM No comments: 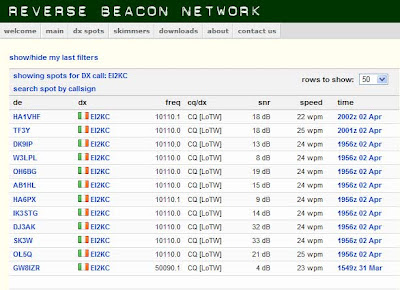 I decided to do a wee bit of QRP (well, almost!) work tonight on 30 metres (10 Mhz), running just 50 watts from my Yaesu FT-1000MP into the home brew inverted V. I just didn't want to run any power. I was "in the mood" for low-ish power so I ran less than barefoot. Within a short time I had some European stations coming back to me, and I worked a few enjoyable QSOs. Then I went to the Reverse Beacon Network website and put my own callsign in the filter and found to my surprise that I was being heard quite well. There were a couple of stations in the United States hearing me too. The best reports were from Sweden and Germany at 33 dB Signal to Noise Ratio and 32 dB SNR. Nice!

You can see the reports from the above screenshot. Also interesting is the fact that I was being heard on 6 metres in Wales a few days ago!
Posted by HamRadioIreland at 9:16 PM 8 comments: