No, I'm not off the air. Just busy with other projects!

If you were worried that I was QRT, fear no more! I've been semi-active lately, but concentrating on other projects, mostly related to my research for Mythical Ireland. But I have been switching the radio on every day, working generally a couple of contacts each day, although granted there have been some days where I was inactive.

Since my last update there are two significant things to report. The first is that I worked another ATNO (All-Time New One) a couple of weeks ago in the form of S01WS, Western Sahara. I worked them on five band slots, and am hoping beyond hope for the chance to work them on 6 metres. I manage a 40m SSB QSO which was fantastic.

I recently changed computer and, in the process, I changed logging software. I've left Hosenose LOGic8 behind, and decided to start using Logger32. I've found Logger32 to be excellent, particularly its colour-coded alert system. This has helped me nab new bands and slots, and even that all-elusive new DXCC! However - and this is a big however - I noticed upon working S01WS that my DXCC total was at 306 current (308 all-time). It should, I felt, have been at 307. A few hours of laborious checking of my log ensued, and I can say without hesitation that Logger32 has it right, and that somewhere along the line a QSO in LOGic8 had been misintepreted as a DXCC that it was not. So my total is 306 current, and that's fair enough.

Western Sahara is the second-last country on continental Africa that I needed. Now I have just one left to go - Eritrea. Maybe it will be activated some day? 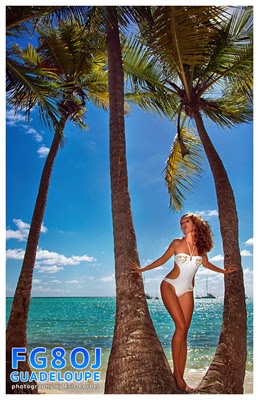 Anyway, there was a tremendous opening from EI into the Caribbean a few nights ago, and I took full advantage, despite having only my hexbeam on that band (my 3-element 6m beam is down). I managed to work THREE new countries on six metres (50 Mhz) in the space of an hour. It was fantastic! They were 9y Trinidad and Tobago, FG Guadeloupe and YV Venezuela. I am thrilled.

This brings me to #83 worked on 6m, and a tantalising 17 off the century. That might not sound like a lot, but it is on six metres!! That could take years!! Last year, for instance, I think I worked seven new DXCC on the 6m band throughout the whole season. Who knows - maybe there will be more nice openings? We can only wait and see . . .

On right is an image from FG8OJ, one of the three stations I worked on 50 Mhz to give me a new DXCC. I worked several other QSOs also, including with KP4 and HI.
Posted by HamRadioIreland at 2:13 PM No comments: