Last week, having taken a step into the weak signal mode JT65, I followed by taking a look at JT9-1. I had been told by Bas PE4BAS that it uses less bandwidth and as it's a new mode, there's less cramming of signals like you get with JT65 because it's not yet that popular.

So I downloaded WSJT-X (v0.9, r3195), and installed it and, within a short time, my computer was decoding signals out of the noise. On my first night CQing, I worked K0KC, followed swiftly by K1JT (Joe Taylor, the man who wrote the JT-9 software!) using only five watts from the Icom 756PRO.

I will say that both JT65 and JT9-1 are very slow modes. It takes about six minutes to make one QSO. Transmit sessions begin on the minute, and take around 50 seconds, with ten seconds of decoding. It takes a bit of getting used to, but I was thrilled to have the help of Doug EI2CN to show me how it's done.

Tonight, having worked JD1BMH in Ogasawara on 20m RTTY as a new country on digi modes, I couldn't find any other decent DX about the bands, so I launched WSJT-X and left it decoding on 14.078. I worked a UA3 who was putting out a CQ and then I spotted something I didn't expect to see!

So I immediately called him back with VK7BO EI2KC -06 (in fact, I didn't properly finish the QSO with UA3 - I didn't give him 73!). The Tasmanian station gave me EI2KC VK7BO -03 and then we confirmed the QSO. Tasmania on five watts. Not bad at all. I think I will enjoy using this weak signal mode a bit more often !!
Posted by HamRadioIreland at 10:24 PM 4 comments:

Video - 5N7M in Nigeria audible on my mobile set-up

This is a short video of Ivan, 5N7M, calling out on 20m SSB, and audible on my mobile set-up, which consists of an Icom IC-706 MkII and a Watson Multiranger antenna.
Posted by HamRadioIreland at 10:27 PM No comments:

A nice QSL card arrived in the post today! 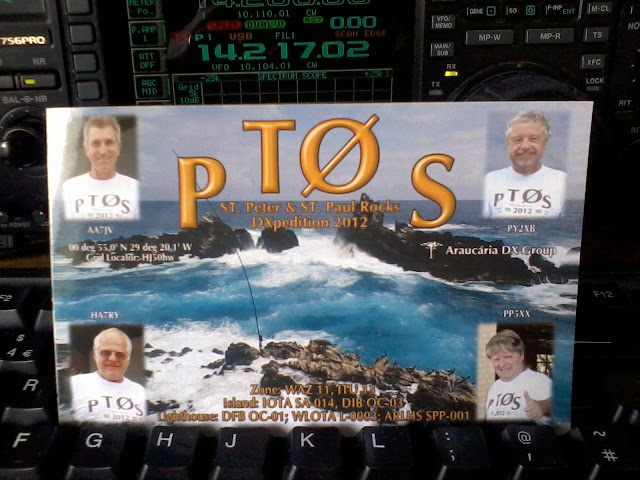 This is the latest arrival in the post today - a QSL card from PT0S, St. Peter & Paul Rocks, the dxpedition that took place in November 2012. I got confirmation of nine slots, which is very nice. This was a brand new DXCC for me when I worked them first.
Posted by HamRadioIreland at 7:20 PM No comments:

Made my first QSO with JT65 mode tonight

Tonight marked another milestone in the shack of EI2KC. I worked my first few contacts using the low power, long distance, digital mode known as JT65. Although I had installed the JT65-HF software some time ago, I hadn't been able to figure out how to use it properly. I could decode received signals, but could not transmit.

In stepped my good friend, Doug, EI2CN, who visited the shack tonight, and who has recently begun using this mode himself. So within a short time, Doug was sitting in the "hot seat", showing me how it's done!! We had a little bit of difficulty getting the software to key the PTT via the SB-2000 interface, until I finally realised that it was looking for the wrong COM port. It had selected COM11 instead of COM2. With a quick change of the settings, everything was working and I was able to transmit.

Within a short time, I was transmitting a CQ with JT65 on 20 metres, on 14.076 Mhz. And, within another short time, I had a Canadian station, VA3MJR, replying to my call. You can see where he called me in the screenshot on right. JT65 is a slow mode, much slower than PSK31. It takes about six minutes to make one QSO. Although it's slow, it's very effective. Running just 15 watts, I could be heard as far away as Alaska, Argentina, and Japan, according to the PSK Reporter website (see screenshot below). Although JT65 is quite slow (each transmit cycle lasts about 45 seconds), it is a very effective way of making long distance contacts using low power and modest antennas. It will be interesting to see how it performs here in the future! 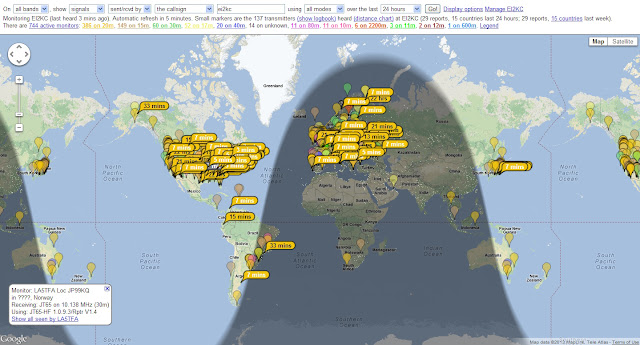 Posted by HamRadioIreland at 12:07 AM 6 comments:


Finally, it is my great pleasure to report that ZK3N, Tokelau Island in the Pacific Ocean, is in my log! I worked the mini German dxpedition on ZK3 this morning on 20 metres CW. I had spent days trying to work them, with a lot of bad luck. A few times when I sat down at the radio to start calling them, they would QRX, QSY or QRT just when they were strong to EU. Other times I had to leave the shack, or leave the house, for various reasons. This time, I managed to get them after just about ten, maybe fifteen, minutes calling. They were on 14.006. I sat on 14.015, having been tipped off by Declan EI6FR that the split was wide. Eventually I could hear "ES2?" so, thinking it might be me (for non CW ops, S is three dits, I is two!), I gave my call a couple of times. He came back with "EI2?" and I gave it a couple more times. Then he came back again with "EI2KC 5NN" and I gave "EI2KC 5NN 5NN TU". And that was it!. Dxcc #288 was in my log!

I enjoyed some PSK and RTTY operation over the past number of days. I worked a few decent DX contacts on digital modes with 40 watts. I am enjoying using these modes. I don't have to listen to any noise on these modes which is nice.
Posted by HamRadioIreland at 8:46 AM 6 comments:

I decided to do a bit of mobile HF operation today, taking advantage of the fine day that it was, and giving the kids an opportunity to have a run around the place! I went to Bellewstown, a hill about five miles south of my home town of Drogheda. I brought the Icom IC-746 which has an internal ATU, and used just the Watson Multi-Ranger whip as the antenna.

Running 100 watts only, I was able to pick up some strong European stations, and then a couple a little further afield, in Russia. I was calling CQ on 18.153 USB. Suddenly I could hear a strong Japanese station calling me. He was JH0JDV, Ely San in Ojiya city. He was a decent 59 signal, sounding strong, with very little in the way of QSB.

We had a chat for a few minutes, and he was able to copy everything I said. I had thought perhaps the conditions weren't great, but this contact proved me wrong. Of course, Ely has a big station with nice antennas, so his signal would be good anyway!

It was an enjoyable hour. I brought the CW key but didn't do any morse. I wanted to see how well I would get out on phone, and was happy enough with my first mobile (phone/SSB) contact into Japan. Note: I had previously worked JA on 17m CW from the car!!

Posted by HamRadioIreland at 7:15 PM 2 comments:

Conditions were absolutely fantastic on 20 metres over the weekend. On Saturday night at around 8pm I turned the beam towards the northeast and started calling for Asia and Pacific. Within a few moments I had a station from Taiwan calling me with a big 59 signal. Over the next hour I worked several Asian and Oceanic stations, including two from New Zealand, two from Australia, one from Indonesia, one from India, and one from Hong Kong! What a great delight to hear these far-off places at night time!

The weekend also brought a few other nice contacts, including two QSOs with 3D2SE in Fiji, one on 20m CW and one on 17m CW. I noticed that my QSO with 5W0M in Samoa on 15m CW was not in their online log, so I worked them again on that slot. 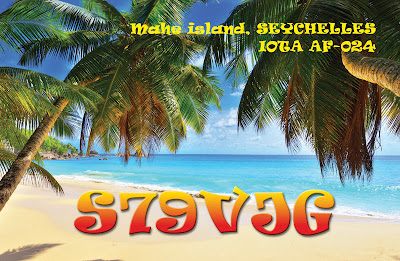 A few other nice ones from the weekend:

This is a short video showing VK9CZ, currently operating from Cocos Keeling Islands, on 17m SSB. As you can see, this was shot at 7.44pm local time. This small dxpedition has been workable both in the mornings and the evenings from Ireland. I have already nabbed them on four slots, which I am delighted with.  I have yet to work VK9-C on 10 metres, so here's hoping!
Posted by HamRadioIreland at 10:47 AM No comments: