My confirmed country total on eQSL has risen to 71 thanks to two new recent eQSLs. It turns out that my contact into Tasmania - my one and only IOTA contest QSO! - was in fact fortuitous in more ways than one. Not only was it a new country for me (if you consider Tasmania to be separate to Australia that is), but it was fortunate that VK7ZE is also on eQSL - and Authenticity Guaranteed as well !! So thanks Laurie for that.

The other new one was OH0/DK1MAX. Max from Germany was on the Aland Islands in the Baltic during July and the contact was made 6 metres CW. So again thanks Max for the nice one on 6. My country total on 6 metres now is 53 (that's 53 in the log, not 53 confirmed!) and I only started working 6 metres this season. So I'm very happy with that.
Posted by HamRadioIreland at 9:23 PM 7 comments:

My one and only contact in the IOTA contest was a new one!!

For a variety of reasons I was unable to dedicate myself to the IOTA contest at the weekend. I did, however, get a chance to listen in on proceedings at around midnight on Saturday. The bands were not packed with contest activity as I might have expected but there was more activity than usual nonetheless.

While working on a video editing project I was listening to VK7ZE on 14.220. He was faint enough in QSB, coming up and down from 4/1 to 5/3. I listened for about half an hour as he worked the contest and he seemed to be getting into Europe quite well from Tasmania.

Then he seemed to hit a quiet patch. He called QRZ IOTA contest a couple of times and nobody went back to him. So I decided to key up and call him and what do you know, he comes straight back with my callsign, my serial number and his IOTA number. I have him 59 001 EU-115. And that was it - my first Tasmania!!
Posted by HamRadioIreland at 5:03 PM 2 comments:

Congrats to Michael on passing the test

I've just received a phone call from my friend Michael Nolan in Kilkenny who has passed his amateur radio test at last. Well done Michael.

Michael is proof of the old mantra that - "if at first you don't succeed, try, try again". He sat and failed the test in June 2009 and again in October 2009. But he was determined to get there and was one of just nine candidates to sit the test a couple of weeks ago in the Comreg offices in Dublin.

Well done again Michael. I look forward to hearing what your new callsign is (I'm guessing it will be EI9G something B, possibly EI9GAB or EI9GBB or EI9GCB) and also I'm very much looking forward to working you on 80 metres!

Have a drink on me!
Posted by HamRadioIreland at 12:57 PM 5 comments:

Can we generate more EI activity? 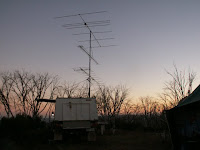 This article appeared in the latest issue of Echo Ireland and is reproduced here to help generate some interest in improving activity levels, particularly on VHF and UHF:

At the most recent IRTS Committee meeting, members resolved to try and get more activity going, particularly in relation to the Worked All Ireland Award Scheme.

A comprehensive article on WAI has been written by Steve EI5DD but pressure on space prevents its inclusion in this issue. It will appear in the next issue.

Co-incidentally, Letters on the subject were received from Brendan EI7CS and via Brendan EI0CZ from Bill NF9A.

Brendan’s letter is printed below and is self explanatory.

Bill’s letter is looking for help in working all 32 counties in EI/GI, mainly on 20 metres.

In Steve’s upcoming article he suggests a frequency on each band.

The WAI ones are well established on 80 and 40 and 2 metres but we need to establish the ones on other bands.

Can we agree a time for all bands as suggested by Brendan?

I suggest you communicate with Trevor EI2GLB our VHF Manager on these issues.

In the meantime why not give a call on the WAI frequencies whenever you can.