A nice surprise in the post from CQ editors! 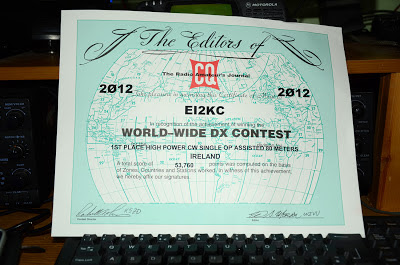 Many of you will know that although I enjoy DXing and HF activities, I am not a huge fan of contesting. I rarely participate in contests, maybe three times a year. Most of the time I do that because I want to use the opportunity to work DX that might I not otherwise get the chance to. Last winter, with my DXCC confirmed tally on 80 metres sitting at 89, I decided to enter the CQWW CW contest on that band alone, to see if I could get my total up. I had a great weekend, making something like 560 QSOs with my lowly Butternut HF6V vertical antenna! As the Logbook of the World confirmations rolled in, I eventually made it to 100 confirmed - DXCC on 80m - thanks solely to that contest.

Yesterday, a nice certificate from the editors of CQ magazine arrived in the post, confirming that I won first place in Ireland for 80m high power assisted. Of course, I cannot boast about this too loudly, as I don't think there were any other entries in the section. However, I am still impressed at what can be done with a 26-foot vertical antenna, and am happy to have won the certificate in any case.

Hopefully many more of you will also have received certificates this week. For me, contesting is not about huge antennas and massive power, running for 48 hours non-stop. I could never do that. Money, space and time do not allow it. I have a young family and am unable to contest for long periods. But dipping in and out of contests for a few hours at a time, as I do, can bring its rewards.
Posted by HamRadioIreland at 9:00 AM 4 comments:

A fantastic day with EI13CLAN on the bands

On Saturday, my local radio club, Dundalk Amateur Radio Society (EI7DAR) had exclusive use of the special event callsign EI13CLAN for 24 hours. This is part of an effort to promote the callsign - and by extension the event that EI13CLAN promotes, which is called 'The Gathering'. 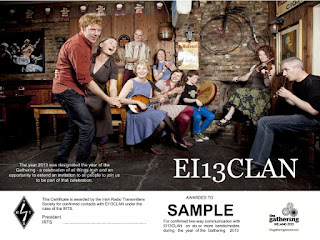 Every club is entitled to enter a competition to run the callsign for 24 hours and the club with the most points will win a radio, an Icom IC756PRO. Our club was the first to take up the challenge.

I was one of two CW operators for the 24 hours. We started at midnight on Friday night and ran through the whole of Saturday. I spent a lot of time initally on 20 metres, but moved up the bands during Saturday, working 17m, 15m, 12m, 10m and even 6m for a time. Band conditions were unfortunately quite poor, so most of the action was on 20 metres. I made about a dozen QSOs into Scandinavia on 6 metres but apart from that the band refused to open. 10 metres was very poor. 12 metres had some strong signals for a short time but after about 15 minutes nobody was coming back to the call. 15 metres was dreadful. 17 metres was okay, but even the European and Russian stations were generally weak, and it could take several attempts to get them into the log.

On Saturday evening I went back to 20 metres and turned the hexbeam north north east and pretty soon I had a mini Japan pile-up going, which lasted for about half an hour. That was about the most excitement for the day. The only decent DX was an A9, a VK6 and a 5T. The K index was around 3, and conditions were unfavourable. I made less than five QSOs into the States for the whole 24 hour period, which will demonstrate just how bad the bands were.

However, the club did brilliantly nonetheless. I finished the day with 580 QSOs. One of our digi stations had over 400 QSOs. We had two SSB stations, two digital stations and two CW stations, all running non-stop. We probably finished the day with over 3,000 QSOs. The competition awards three points for a digital QSO, two points for a CW QSO and one for a phone QSO. It will be interesting to see what our final score is.

Congratulations to all the operators involved for such a great effort. It was an enjoyable day, and although it is a competition, it didn't feel like a "contest" as such. We all enjoyed it. The other ops were: Thos EI2JD, Oleg EI7KD, Seamus EI3KE, Don EI6IL, Tom EI9CJ, Jim EI2HJB, Brian EI8EJB and Mark EI6JK.
Posted by HamRadioIreland at 10:46 AM No comments:

A couple of milestones reached

I just worked HB0/DJ2IA on 15 metres CW and noticed that 15m was the only band on which I didn't have Liechtenstein. On checking my log progress, I discovered that HB0 is in fact the 250th country I have worked on 15 metres. 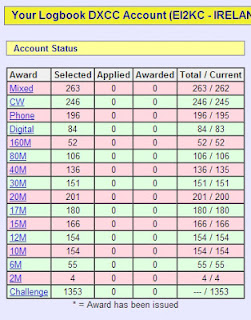 This follows hot on the heels of recently passing 200 countries CONFIRMED on 20 metres on ARRL's Logbook of the World. I remember when I was struggling towards 100 confirmations on each of the HF bands. I think 20 metres was the first to come, and I remember in particular that 80 metres was a real struggle. As you can see, I am still sitting on 106 QSLs on that band. But that's okay, because I am only using a Butternut vertical on that band.

The next target to be achieved, by the looks of my LoTW account, is 200 confirmations on phone mode. I am currently on 195. So just five more to go. And that could take months!

On eQSL I have a total of 173 countries confirmed.
Posted by HamRadioIreland at 8:22 AM 4 comments:

This is a video that was recorded live while I worked EA6ES, my second QSO on digital modes on the 50Mhz (6 metre) band. I had just worked EA3AYQ as my first ever 6m digital contact, on PSK31, and could hear a few strong signals from the direction of Spain. You can hear the PSK tones in the video - I left them playing so that you could hear them. EA6ES is in Palma Mallorca in the Balearic Islands. His name is Francisco, as you can see in the video. He didn't mind having a bit of a chat with me, which, although unusual on 6m because the band can close very quickly, was very welcome because it makes the video more interesting in my opinion. Anyway, I hope you enjoy this video, warts and all !
Posted by HamRadioIreland at 9:07 PM 2 comments: