There was significant propagation late into the night last night on some of the higher bands. Having worked a couple of contacts into the United States at around 11.15pm on TWELVE METRES (yes, 12m!!!), I then nabbed Nicaragua on 15m CW, followed quickly by Mexico (XE) on 17m. Couldn't believe how lively the bands were so late into the night. One of the 12m contacts was in Utah, quite a distance I'd say, but even more remarkable given the time of night.

As I write this, the Solar Flux Index is 119 and the Sunspot Number is 103. The sun is absolutely crackling with spots. There are no fewer than SIX groups of sunspots right now (see image), so keep a listening ear, especially on the higher frequencies. 10 metres could open at any time.

At midnight I put out a CQ on 17m CW and got a whole pile of contacts from the USA, including three west coast QSOs, one from Washington State and two from California. It really was a fantastic night's propagation. But I had to retire to the bed because it had been a long day.

If you're around a HF radio, now would be a good time to switch it on!
Posted by HamRadioIreland at 4:27 PM 1 comment:

I haven't had much time for radio over the past week but I have managed to find a spare half hour or an hour here and there. Things have definitely improved, with late openings into the Caribbean and the USA on 20 metres - I have heard signals on both CW and SSB as late as 10pm and onwards this week.

Reviewing the log I see lots of interesting QSOs, including two contacts with 4A4A, Revilla Gegido, which I managed to make before that DXpedition finished. I nabbed them on 15 metres RTTY and CW. They were extremely weak most of the time and EIs found it difficult to get them into the log. Except, that is, for my near neighbour, Doug EI2CN, who worked them on no fewer than 13 band slots. Hats off!!

On Saturday I put 5X1NH in Uganda into the log on 17m CW - a new DXCC on that band. EI1NC/P, the North Cork Radio Group, were active from Cork Gaol over the weekend and were 59 on 40m SSB when I contacted them. Well done and congrats on the special event station.

I worked into Australia for the second weekend running when I nabbed VK6AA on 20m CW in the RU contest. I also spoke to Roin RW3LG Maritime Mobile on 12m SSB, having previously chatted with him on 20m a week or so before. ZS1OIN gave me a new country (South Africa) on Saturday on 15m. YB1ALL in Indonesia made it into the log in the contest also on Saturday. PY Brazil was heard - and worked - on 10m on Saturday evening - in fact I made two contacts into Brazil on that band.

Just a short while ago I made a contact with OA1F (Peru) on 15m CW, giving me a new one on that band.

So as you can see, even in limited time one can make quite a dent in the list of DXCCs worked. I will be keeping an ear out for two further DXpeditions which have started this week - VU4PB Andaman Islands and S21YZ in Bangladesh.
Posted by HamRadioIreland at 6:42 PM 1 comment:

I have yet to work either the CY0 Sable Island DXpedition or the Revilla Gigedo Island 4A4A DXpedition. Unfortunately most of the time I have been able to hear neither. I did hear 4A4A come up strong on 15m CW one of the evenings during the week after dark but couldn't get them in the log. I hope to try to nab both of these rare DXCCs before they finish. I will keep you updated. Congrats to my near neighbour, Doug EI2CN, who has 4A4A on eight band slots and is the leading light of the EI brigade, followed closely by Eoin EI9O in Longford. Well done gents. (Said with not a hint of jealousy, honestly!)

Confirmation of 102 countries on eQSL - a proud day for me

I've just logged in to eQSL and to my surprise and delight I have broken 100 DXCCs! I have 101 countries confirmed. Two of the new countries confirmed are Chagos Island and Zimbabwe. I was logging on to see if there were any eQSLs from the ARRL DX contest and to my surprise I found a lot more. That's the first real milestone achievement - and done in just over one year and four months. I am chuffed, to say the least.

10m open to the States for the ARRL DX contest

I ended up with a respectable 152 QSOs in my log, which is not bad considering I was away from the shack most of the weekend ! On Sunday afternoon the 10 metre band opened nicely to the States (as predicted by my good self in a recent post (see below!)) and with just 100 watts and my trusty old Antron 99 I was able to work almost everything that I could hear, with only one exception, and most of them heard me on my first call. Canada, believe it or not, was a new country for me on 10 metres, so I was delighted to nab some of the VE's while the band was open. It didn't close on my end until after half past six in the evening, so then I switched to 15 metres where there was action until half past eight. And even then 20 metres was still wide open and my last contact was 21.43 into Pennsylvania. At that stage I had to call it a night because I had an early start in work this morning. I was at the desk in Dundalk at 8.25am, bright as a button. (Yeah right!)

Anyway, I hope you call had a nice time in the ARRL contest. I heard lots and lots of EI stations being worked when I was at the radio, and it was very pleasing to hear such a high level of Echo India participation. So well done to all. By the way, right now the Solar Flux Index is 143 so expect more action on 10 metres tomorrow.
Posted by HamRadioIreland at 7:48 PM 1 comment:

It may seem like a minor miracle, but the long-awaited DXpedition to Sable Island has begun. As I write this, I can (faintly) hear N1SNB/CY0 on 30m CW and already he's working a huge pile, as expected. So keep an ear on the bands for that elusive /CY0 and let's hope you land them in the bag on at least a couple of bands!

Here are the frequencies you can expect to hear the trio on:


More information on the CY0 Dxpedition website.
Posted by HamRadioIreland at 11:49 PM 2 comments:

Keep a listening ear for propagation on 10m and VHF 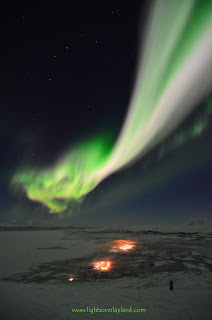 The sun is really bursting into life. Right now the Solar Flux Index is 111, the sunspot number is 72 and yesterday there was a geomagnetic storm (aurora borealis / northern lights) which were seen as far south as Northern Ireland.

Unfortunately I am working during the daytime but any of you lucky enough to be in the shack during daylight hours should keep an ear on 10 metres. The the SFI above 100 there is a high chance of some decent propagation.

Also with the K index hopping up and down it would be worth keeping a listening watch on 6 metres, 4 metres and 2 metres. There is a bit of a lift right now on 2 metres with some EI stations working simplex into Wales and beyond. I heard the Belfast repeater GB3NI while mobile in Dundalk this evening. I don't normally hear it because of the mountains between Dundalk and Belfast.
Posted by HamRadioIreland at 8:42 PM No comments: