Posted by HamRadioIreland at 12:31 PM No comments:

Our activation of Tory is now sadly ended and we have returned home. It was a fantastic five days, and although propagation was a bit hit and miss, the bands provided us with solid action, especially on 30m and 20m where we found good rates at times.


This activation made history for the EJ7NET group. We made trans-Atlantic QSOs on 6 metres for the first time. We also activated more bands and modes than ever before. We had 9 QSOs on 160m CW and even one on SSB! We had activity on all bands from 1.8 Mhz through to 50 Mhz, and used a variety of modes, including LSB/USB, CW, RTTY, PSK31, PSK63 and JT65.

By the end of the dxpedition we had achieved over 5,000 QSOs, which is by far the best performance of the four years I have been on the islands with the Westnet DX Group.
Posted by HamRadioIreland at 12:25 PM No comments:

This is a short video showing some CW operation on 6 metres (50 Mhz) during the EJ7NET activation of Tory Island, Co. Donegal. We managed over 350 QSOs on this band, including about ten into the United States, all using a two-element HB9CV beam.
Posted by HamRadioIreland at 5:32 PM No comments: 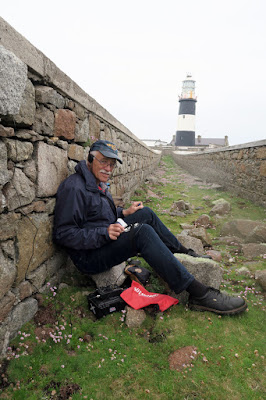 On Monday, one member of the EJ7NET team, Rolf HB9DGV, went to the lighthouse on the island and activated it using his KX1. Rolf is a huge proponent of SOTA and portable activations, and while there are no registered SOTA peaks on the island, there is a lighthouse (ref IRE-075). You can see Rolf's photos of his various activations on his Flickr page here: https://www.flickr.com/photos/33928583@N05/

While at the lighthouse, he made eight QSOs using 5 watts and a portable wire dipole.
Posted by HamRadioIreland at 9:47 AM No comments:

Today was a great day on the bands, particularly on 6 metres, where we managed several QSOs into the United States in the afternoon. This was achieved with a HB9CV two-element beam at about 15 feet. As of this moment, we have over 200 QSOs on 50 Mhz since yesterday, which is fantastic.

The 50 Mhz contacts into the USA were not all easy. It took some time to get K1TL into the log. In fact I'd safely say it took 10 to 15 minutes to complete the QSO. Some stations were easier to hear and work. We were ecstatic at getting one in the log, but we ended up with six or seven NA QSOs. And all the time we were beaming NA, we were still working Europeans, some from Italy, Spain and France, but some from other areas. We worked a couple of Scandinavian stations off the back of the beam.

Elsewhere, we have been plugging away on the HF bands. We had some activity on 20m, 17m and 15m today, with occasional pile-ups and also occasional dry periods. As of this moment, we have over 2,000 QSOs in the combined logs, which is not bad at all. Conditions on 20 and 15 are interesting. A lot of UK and Netherlands stations were strong on those bands today, while everyone else was comparatively weak. Last night (Sunday), we had some nice action on 40m SSB.

Weather today has been largely overcast, with drizzle at times. Generally typical Irish weather. Rolf HB9DGV activated the lighthouse on the island as EJ/HB9DGV/QRP.

Posted by HamRadioIreland at 7:58 PM No comments:

EJ7NET - a few pictures from our visit to Tory Island


Posted by HamRadioIreland at 8:47 AM No comments:

Day 2 begins and it's raining relentlessly

It's day two of our activation of Tory Island (EU-121) and it's raining relentlessly. We still have two more antennas to set up. Activity has been good (at times) so far on 30m CW and 40m CW/SSB. We have about 370 QSOs so far from two stations. The 6m station is being set up as we speak. Thankfully, the antenna was set up last night.

Spirits are high among the EJ7NET group. Dermot EI5IQ pitched his tent and slept out there overnight. The rest of us opted for the comfortable beds here at Teach Sabba.

As we are approaching midsummer, there is no complete darkness at night. A beautiful sunset was followed by a fantasic red sky last night, so needless to say I spent quite a bit of time out with the camera. I even managed to get a photo of the shack late last night.

The EJ7NET team has arrived on Tory Island, Co.Donegal

The EJ7NET Westnet DX Group has arrived safely on Tory Island (IOTA EU-121) and we are currently erecting antennas. The QTH is fabulous and has great take-off over the ocean in most directions. It is extremely scenic here, with views towards the mountains on the mainland. Our ferry trip was very calm and the weather has been fantastic so far.

One station is already up and running, with Gordon GM7WCO operating on 30 metres CW. Tony EI3HA, our chef, is preparing dinner.