I am hearing this "beacon" on 2 metres on 144.481.4. I know morse code but I cannot for the life of me make out what this is transmitting. It sounds like EA but there's a whole string of characters that are so close together it's damn near impossible to make it out. It really does sound like gobbledygook!! I would welcome any information as to where this beacon is located and what it's supposed to be sending. You can email me at hamradioireland AT gmail DOT com. Thanks.
Posted by HamRadioIreland at 11:00 PM 5 comments:

A grey day up at Clermont Cairn 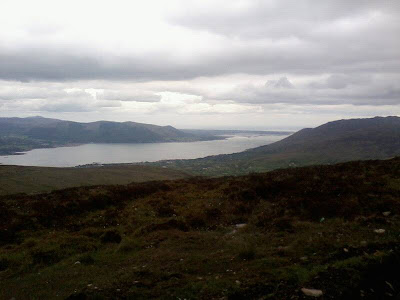 I did some portable HF from Clermont Cairn near Dundalk today at lunchtime. I went up to the site of the EI2CCR repeater hoping to get some DX on CW but found conditions were not ideal. After putting out a CQ for what seemed like ages on 14 Mhz I had nobody coming back. So I kept going and eventually worked a couple of G stations - hardly great DX but at least I knew the equipment was working!!

It was a grey and windy day up on the mountain although it was clear and I could see a good distance away. To the north I caught a glimpse of Lough Neagh. I made a number of contacts into Europe and one QSO into the United States and at about 1.45pm (12.45 UTC) I decided to head back down the mountain to go back to work.

On returning, I had a nice email from one of the G stations, G4DTD, Ross, who says I am his only EI QSO since he moved to Cornwall in 2001. So I was delighted to hear that. Ross uses old valve radios and an indoor wire antenna. Nice QSO Ross, HPE CUAGN. 73.

Published with Blogger-droid v1.6.8
Posted by HamRadioIreland at 4:41 PM 2 comments:

Butternut back up and running 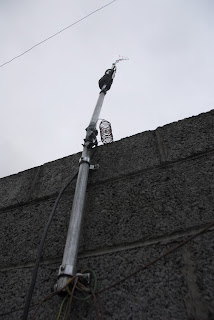 The Butternut HF-V6, my main HF antenna, is back up and running thanks in no small measure to the kind assistance of my friend and fellow Echo Ireland contributor, Pat Fitzpatrick, EI2HX.

The "break", caused by high winds, might have been somewhat of a blessing in disguise. It gave us an opportunity to open some of the joints and let the water out HI!! And all joints were tightened up and sealed properly and, in two cases, new bolts fitted.

After about two hours of work we had the antenna back in one piece and had decided on Plan B as a means of getting it erected again. Plan A involved replacing the ground/mounting tube with some galvanise steel pipe which had a thicker wall. But it was not a perfect fit for the insulator at the bottom of the Butternut.

So we went for Plan B which involved using the original (broken, therefore foreshortened) piece of ground/mounting tube and so we drilled new holes in it and attached the antenna and slipped the antenna back into its wall brackets.

A quick test with the Yaesu FT-1000MP revealed that it was tuning on all bands. In fact, it had "held" its tune in a number of places and only needed slight adjustment. I made some DX contacts after we retired to the shack just to prove it was working. I worked Martinique, Newfoundland and Asiatic Russia. So I'm happy enough that it's working properly. We also reattached the ground rod and also some radials. All in all, a good night's work.

Picture on right shows yours truly (yes, that's a Superman hoodie!) trying to reattach the coil to the ground tube during the latter stages of the repair. I must say Pat takes a good photo, but it's just a pity about the cheesey grin!

Thank you Pat. If you haven't seen his blog, Pat writes about ATV activities and his excellent blog can be found at thehxfiles.blogspot.com
Posted by HamRadioIreland at 8:51 PM No comments: 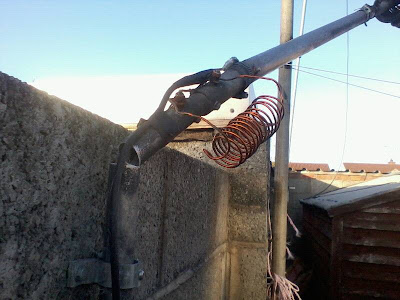 This sorry sight is my Butternut multi band vertical, which was snapped by the wind yesterday. We are well used to strong winds in Ireland, but not usually in May. There were extremely strong gusts at times and by evening time there were tree branches scattered around the place.

Efforts are currently under way to find or make a replacement part and get it working again. I am grateful for the assistance of EI2HX, Pat, in this regard. Within a short time yesterday evening Pat was already trying to source a replacement part. The bit that's broken is a 24 inches long, 1.1-inch (approx) diameter aluminium tube.
Published with Blogger-droid v1.6.8
Posted by HamRadioIreland at 11:20 AM 2 comments:

Today was a fantastic day on 6 metre (50 Mhz). I switched on the radio at 9.50am and there was already activity on the band and it lasted for the whole of the day, right until the evening time. For a period in the afternoon, the band was wide open, and I managed to get a pile-up going on SSB with just 100 watts on my dipole. I worked 140 QSOs on 6 metres today and put 16 different countries into the log. These were (not in any particular order): Estonia, Sweden, Germany, San Marino, Latvia, Italy, Denmark, Netherlands, Switzerland, Poland, Austria, Spain, Croatia, Czech Republic, France and Lithuania. There were some strong signals on the band too, with some peaking at 40 dB over 9 on my S-meter. I am now using an icom IC-746 for 6m activity and I must say I am enjoying it immensely.

Above is a video showing the progression of the Sporadic E propagation over Europe during the course of the afternoon. You will see EI2KC on the map a number of times! It's interesting to see how the band appeared to be closing and all of a sudden it opened up again.
Posted by HamRadioIreland at 10:30 PM 2 comments:

I have qualified for DXCC Mixed and DXCC CW . . . overnight!

The other night, out of the blue, an email arrived from the ARRL. It was my Logbook of the World certificate. I had sent away the relevant paperwork to confirm my identity as EI2KC and it took about a week or so for the certificate to be sent.

So I went ahead, there and then, and uploaded my log to the LoTW website. I couldn't wait around - after all, I knew that out of 5,750 QSOs, there had to be a good deal of matches with other LoTW users. And indeed there were. After about half an hour processing my log the ARRL LoTW website confirmed that I had a total of 1,490 QSLs. So with the help of Dave EI9FBB (who I had phoned for 'technical support' HI) I checked my standings.

I also have 70 DXCCs confirmed on 30 metres. I'm beginning to think I should slow down with this hobby. Some friends are telling me I'm going too fast. That I will burn out. That I will lose interest. Well, maybe they're right, but I'm enjoying it now as much as I did in the beginning. Even more in fact. Because in the beginning (October 2009) I didn't know CW and I had no Signalink for digi modes and my antenna and radio system weren't as good as they are now. And with the MA5B minibeam acquired plus a rotator, all I need now is a mast and I will soon have a beam too!

To top it all off, I passed the 100 countries worked mark on 12 metres this week. So now I have 100+ countries worked on 40m, 30m, 20m, 7m, 15m and 12m. With 85 worked on 80m hopefully next winter I will get over the century on that band. I'm at 63 on 10m which is poor enough but if the recent lift in propagation continues hopefully it won't be too long before I'm at the century there too. Six metres is a different challenge. I have 52 confirmed there, and pretty much all of Europe, so unless something spectacular happens this summer (the E season started here on May 1st) then I can't imagine I'll be anywhere near the 100 DXCC mark on that band any time soon. As for 160 metres, I am on 62 DXCCs worked and will need to move QTH to get the hundred on that band!
Posted by HamRadioIreland at 8:22 PM 4 comments: 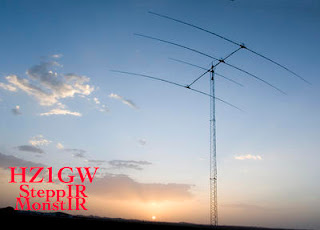 Just a couple of days ago, I checked my progress on 12 metres, knowing that I was approaching the 100 DXCC mark on that band. I had crept up quickly since the beginning of the year as 12 was open more and more to various parts of the world.

Recently there had been good openings to North and South America in the evening time, even long after dark. This evening I put out a CQ on 12 metres CW, knowing that there was a chance I might bag a couple more. As the evening started I was on 98 DXCCs worked on that band, so I needed just two more to make the century.

I was also testing out a radio which I have acquired for HF but especially 6 metres and 2 metres multimode. It is an Icom IC-746. An older radio, perhaps, but an excellent rig, and the staple diet of many a great shack. So I gave out a CQ on 12 CW with my Antron 99 and 100 watts out of the 746.

To my surprise, Oscar Mike (OM / Slovakia) was a new country for me on 12m, so that made it 99. Then came the coincidence, this time with me calling out on SSB.

A really extraordinary coincidence. How often would that sort of thing happen? We exchanged reports and then had a good chin wag. That's one nice QSL and I look forward to exchanging cards with Ken in the near future.
Posted by HamRadioIreland at 8:28 PM 3 comments:


This is the sort of chaos you hear on the HF bands when a rare country is on. In this case, AH0J (Mariana Islands, Pacific Ocean) is calling cq and half the world is answering. This is only a short clip, but I can assure you that during several minutes' listening it became apparent that a lot of the hams calling him were not listening to him, just calling and calling continuously, causing QRM on the people he was trying to work. Some of these pile-up situations bring out the very worst in bad operators. And the CW pile-ups are even worse. Some operators continue to call when some other country has been called and cause QRM over and over again. All I can say is that I'm glad I have a VFO and a band selector so I can QSY out of there.
Posted by HamRadioIreland at 2:30 PM 7 comments:

The Intrepid-DX Group has been planning for many months to conduct a large multi-national DXpedition from Kabul, Afghanistan as T6PSE.

We had been receiving advice and assistance from Jim McLaughlin WA2EWE/T6AF, who was killed in Kabul earlier this week.

Given these circumstances, and with careful consideration, we have decided to cancel our plans for a DXpedition from Afghanistan. There is just too much uncertainty in the region for us to continue to move forward with our plans.

In the next several weeks, I will refund all donor/sponsor monies that have been given to support our plans.

Co-Leader T6PSE DXpedition
Posted by HamRadioIreland at 11:26 AM No comments: