I participated in an AREN training exercise with other local hams in Drogheda today. AREN stands for Amateur Radio Emergency Network, which is a public service voluntary radio emergency network run by the Irish Radio Transmitters Society (IRTS) in conjunction with ComReg.

The training consisted of using radio communications plus a GPS device to track down various 'clues' which had been hidden in various areas of a park known as 'The Glen' at Newfoundwell in Drogheda. It was interesting, fun and educational.

The 'team', for which I did the radio comms, managed to find all five items using the GPS. When we found each item, there was a code written on the front which we had to relay to control. Control was manned by Thos EI2JD and Tony EI4DIB, who is the AREN Co-ordinator for the North East. After successful transmission of the code, we were then sent a question from control, relating to information on the back of each clue. On receipt of the question, we had to find the answer and relay it back to control before being given the coordinates for the next clue.

All going well, there will be weekly exercises in various parts of Drogheda and beyond. This training followed a very recent successful outing to Clogherhead, where local AREN volunteers provided emergency and backup communications for a 10 kilometre road race.

If you are interested in becoming an AREN volunteer, you can contact Tony Allen EI4DIB through his blog.
Posted by HamRadioIreland at 12:41 AM No comments:

Lightning bolt strikes not far from my QTH

There was a thunderstorm near my QTH yesterday evening (Wednesday, July 11th). It raged for about half an hour. I left the camcorder at the back window looking out at my antennas, and managed to catch this fork lightning which must have struck less than a kilometre from my QTH. As you can see (or hear) in the video, the thunder comes about 2-3 seconds after the fork, so it was no more than a kilometre away. The antennas visible are the MA5B minibeam and in the background my Butternut vertical.

PS: I have been made redundant from my job. I finished on Monday. I am now trying to work full-time on completing my new book, 'Newgrange - Monument to Immortality'. As a result, I don't imagine I will have much time for radio or blogging but will do my best . . .
Posted by HamRadioIreland at 8:00 PM 3 comments:

Some nice QSLs in via the bureau 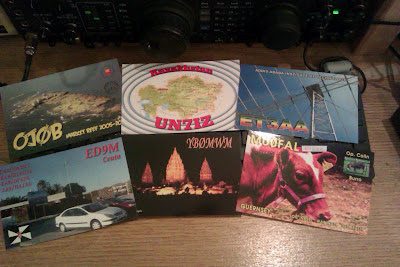 I received my biggest delivery of QSL cards to date from the IRTS bureau yesterday, and included in the bundle of 221 cards were some very nice ones. Perhaps the most exciting one was from ET3AA, Ethiopia, for QSOs on 10 metres SSB and 40m CW.

Now all I have to do is process all the cards and write the returns !
Posted by HamRadioIreland at 10:35 PM 1 comment: