Qualifying for the Hungarian ITU 2015 award 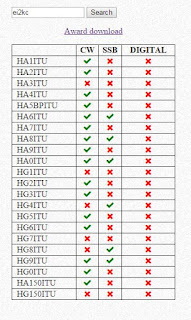 I don't normally chase awards, but having worked a number of the special HA*ITU/HG*ITU stations, I decided to see what might be involved in getting an award. When I looked up their online log, I found I'd had enough QSOs with the various Hungarian ITU stations to claim a bronze award, so I set myself the task of trying for at least silver, if not gold.

The special call signs are on air to celebrate the Telecom World Conference which is being held in Budapest this year. For the various award categories, and how to claim them, see this page.

To claim the gold award seemed like a difficult task. To get gold, you have to work EVERY station on the list at least once. They are listed in the image on the right. When I made out a list, I found that I was short five or six stations. Gradually over the past 48 hours I have worked lots of them and by today I found I only needed three more. One of these was the elusive HA1ITU, who is apparently using QRP home brew CW equipment. He finally popped up on 20 CW and 17 CW and I nabbed him on both bands. The chirp from his equipment suggested to me that he was indeed on a home made transceiver. The last one needed today was HG150ITU, who I nabbed on 20 metres CW. The logs are not yet all up to date, as can be seen in the above image, but I do have all the stations worked at least once, and some of them several times. This will be the first award that I have hunted for. I'm looking forward to getting it.

Posted by HamRadioIreland at 11:23 PM