My first QSO with Japan on 6 metres

Well it finally happened. After weeks of waiting, I managed to log two JA stations on 6 metres this morning. I got a message from Doug EI2CN saying he was decoding and working Japan. Now Doug has a much more substantial station than me, at a much higher elevation, just a few miles from here. He regularly sees and works stations that I cannot see/hear.

However, after waiting a little while I started to see decodes from Japan on FT8. I put out a CQ JA, and after a few minutes I was called by JG2BRI. He was at -15 and gave me a -18, but with heavy QSB on the band other EIs were reporting that they were having difficulty completing QSOs.

I grabbed my smartphone and made a quick video. I hope you can forgive my excitement, but this was the moment of my first ever Japan QSO on 6m - one I have waited 11 years for. I think the "yeeehaa" was justified!

A few moments later, I was also called by JH4UYB and managed to complete with him too, with signal reports of -16 each way. After that the band closed up pretty quickly here, but I did not mind as I had finally achieved a QSO that I have been anticipating for years.
Needless to say I also worked two new squares with these JA QSOs - PM84 and PM86. Also, Japan becomes my 110th DXCC worked on 50 Mhz. 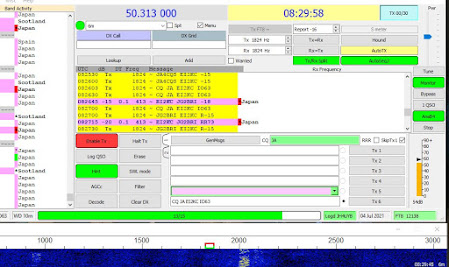 A screenshot of my first QSO with Japan on 6 metres.

A screenshot from PSKreporter.info showing some of my decodes in Japan.

Posted by HamRadioIreland at 1:19 PM