My 50,000th QSO - an extraordinary coincidence 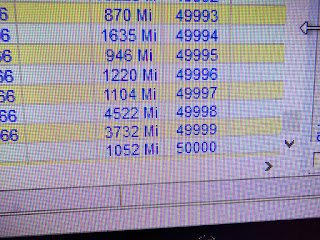 I was unable to spend long in the shack this morning as I was heading out to play music. In the ten minutes I was at the radio, I watched the DX clusters to see if there was anything interesting to work. Seeing nothing special, I decided to "spin the VFO" on my Icom IC-7300.

On the 12 metre band, I listened on the SSB portion and spun the dial to find out if I could hear anything that might make a good 50,000th QSO. I looked at the spectrum scope and could see some activity around 24.940Mhz. I tuned in to the station and could quickly hear that someone was calling CQ. But who?

I recognised the callsign immediately. Luis, EA5BRE, gave me my very first QSO on HF the day I got my ham licence, way back in October 2009. On that day, I received my new callsign af around 4.45pm on what was a Friday evening. I had just left work and was heading home. I worked my good friend, the late EI4DIB (Tony) on the Dundalk 2m repeater (on 145.675) on the way home. My callsign back then was EI8GHB. When I got home, I found the higher bands all dead and there was very little activity on the phone sections of 40 metres and 80 metres. Back then, I did not know CW (something I learned in the winter of 2009-2010 and, having passed my morse test in February 2010, I got my new callsign EI2KC in early March 2010).

Luis and I have had only one other QSO in the intervening years - a 17m SSB QSO in June 2017. Luis lives in Alicante and is an active DXer with 10-band DXCC.

Today's QSO was very special, because of the way I unintentionally stumbled upon his CQ. I felt it was immensely coincidental and just HAD to work him as QSO #50,000, given that he had been my very first HF contact when I began my ham radio activity from this shack 13 years ago.

Here is a short video of some of my QSO with Luis today:

Posted by HamRadioIreland at 2:06 PM

Email ThisBlogThis!Share to TwitterShare to FacebookShare to Pinterest
Labels: 000, 50